School Computers to Be Replaced by School iPads in 2016 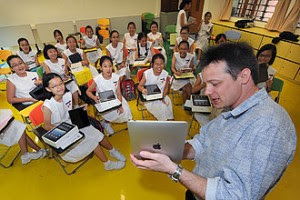 With the technological age in full force, computers have become a staple in schools. Every single grade it seems is using computers for learning and entertainment while teaching. But, could the age of classroom computers be over? Is there a new piece of technology that will undoubtedly dethrone the computer in the classroom? Maybe, as many think tablets will eventually replace desktop computers in classrooms.

A recent survey of district tech directors discovered that all of them were testing or deploying tablet devices. What’s more is that the survey also discovered that these directors expect tablets to outnumber computers in the classroom by the year 2016.

Analyst for Piper Jaffray Gene Munster recently surveyed 25 educational IT directors at a conference about the integration of technology in classrooms. Munster’s survey, which was titled “Tablets in the Classroom”, revealed that all 25 directors were using Apple’s iPad in their schools while none of the participants were testing or deploying Android-based tablets. Munster went on to explain that this trend in education may be due to a familiarity with Apple devices among students and school employees.

According to Munster, “Within the next five years, our respondents expect to have more tablets per student than they currently have computers.” Considering iPads represent a majority of the tablets in schools, Munster believes that the word “tablet” is synonymous with “iPad”. The school districts that were represented in the survey currently have about 10 students per every computer. However, in the next five years, IT directors expect that number to drop to about six students per iPad. Devices, like the iPad, are more desirable over computers in the classroom because they provide a more individualized learning experience than traditional computers.

Tim Cook, the new CEO of Apple, stated earlier this year that demand for the iPad is strong among education customers. Back in February Georgia Senate President pro tem Tommie Williams proposed a plan to replace conventional textbooks in middle schools with the iPad. Williams met with Apple to talk about a plan to make the iPad a central component in the state’s education system.

The iPad is slowly creeping its way into schools. Many students can rent the devices from their campus library in college and some schools, like the ones surveyed by Munster, are actually using them in the classroom. If expectations are correct, students in 2016 are going to have some fun times in the classroom.

A Copier Rental is a quick way to mass produce important documents for potential customers at an event or conference. Renting office equipment is simple and easy and it can also save you loads of time and money. Rentacomputer.com has been offering copier rentals to more than 1000 cities worldwide for over 20 years.
Tags No Tags