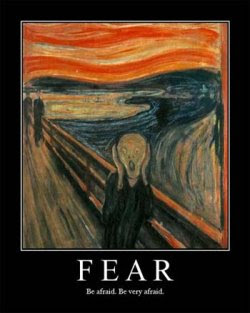 Fear is a painful emotion by the expectation of evil, or the apprehension of impending danger; anxiety; solicitude; alarm; dread; like our fear of ghosts and zombies as a child, and our fear of failure and death as an adult. I’m here to help Linux newbies defeat their fear, but not the kind of fear that I was talking about. Instead, I’m here to assist those who are suffering from CLI-phobia, or the “fear of Command Line Interface”. I will list some indispensable commands and keyboard shortcuts with their corresponding functions to guide the fearful in their journey to conquer the horror of using the Linux terminal.
Here are some of the most essential Linux terminal commands andkeyboard shortcuts:
*Essential Commands

Directory navigation
Pwd – “Print working directory” – show what dir you’re in.
ls – List the contents of a dir.
ls –l – List the contents of a dir and show additional info of the files.
ls –a – List all files, including hidden files.
cd – Change directory.
cd – Go to the parent directory.
Examining files
file – Determine the type of a file.
cat – Concatenate a file.
less – View text files and paginate them if needed.
Manipulating files and directories
p – Copy a file.
cp –i – Copy a file and ask before overwriting.
cp –r – Copy a directory with its contents.
mv – Move or rename a file.
mv –i – Move or rename a file and ask before overwriting.
rm – Remove a file.
rm –r – Remove a directory with its contents.
rm –i – Ask before removing a file. Good to use with the -r option.
mkdir – Make a directory.
rmdir – Remove an empty directory.
*Essential Keyboard Shortcuts

Ctrl + Alt + F1Switch to the first virtual terminal. In Linux, you can have several virtual terminals at the same time. The default is 6.Ctrl + Alt + FnSwitch to the nth virtual terminal. Because the number of virtual terminals is 6 by default, n = 1…6.ttyTyping the tty command tells you what virtual terminal you’re currently working in.Ctrl + Alt + F7Switch to the GUI. If you have X Window System running, it runs in the seventh virtual terminal by default. If X isn’t running, this terminal is empty.Ctrl + Alt + +Switch to the next resolution in the X Window System. This works if you’ve configured more than one resolution for your X server. Note that you must use the + in your numpad.Ctrl + Alt + –Switch to the previous X resolution. Use the – in your numpad.MiddleMouseButtonPaste the highlighted text. You can highlight the text with your left mouse button (or with some other highlighting method, depending on the application you’re using), and then press the middle mouse button to paste. This is the traditional way of copying and pasting in the X Window System, but it may not work in some X applications.If you have a two-button mouse, pressing both of the buttons at the same time has the same effect as pressing the middle one. If it doesn’t, you must enable 3-mouse-button emulation.This works also in text terminals if you enable the gpm service.Ctrl + Alt + BackspaceKill the X server. Use this if X crashes and you can’t exit it normally. If you’ve configured your X Window System to start automatically at bootup, this restarts the server and throws you back to the graphical login screen.Home or Ctrl + aMove the cursor to the beginning of the current line.End or Ctrl + eMove the cursor to the end of the current line.Alt + bMove the cursor to the beginning of the current or previous word. Note that while this works in virtual terminals, it may not work in all graphical terminal emulators, because many graphical applications already use this as a menu shortcut by default.Alt + fMove the cursor to the end of the next word. Again, like with all shortcuts that use Alt as the modifier, this may not work in all graphical terminal emulators.TabAutocomplete commands and file names. Type the first letter(s) of a command, directory or file name, press Tab and the rest is completed automatically! If there are more commands starting with the same letters, the shell completes as much as it can and beeps. If you then press Tab again, it shows you all the alternatives.This shortcut is really helpful and saves a lot of typing! It even works at the lilo prompt and in some X applications.Ctrl + uErase the current line.Ctrl + kDelete the line from the position of the cursor to the end of the line.Ctrl + wDelete the word before the cursor.Shift + PageUpScroll terminal output up.Shift + PageDownScroll terminal output down.clearThe clear command clears all previously executed commands and their output from the current terminal.Ctrl + lDoes exactly the same as typing the clear command.resetIf you mess up your terminal, use the reset command. For example, if you try to cat a binary file, the terminal starts showing weird characters. Note that you may not be able to see the command when you’re typing it.historyWhen you type the history command, you’ll see a list of the commands you executed previously.ArrowUp or Ctrl + pScroll up in the history and edit the previously executed commands. To execute them, press Enter like you normally do.ArrowDown or Ctrl + nScroll down in the history and edit the next commands.Ctrl + rFind the last command that contained the letters you’re typing. For example, if you want to find out the last action you did to a file called “file42.txt”, you’ll press Ctrl + r and start typing the file name. Or, if you want to find out the last parameters you gave to the “cp” command, you’ll press Ctrl + r and type in “cp”.Ctrl + cKill the current process.Ctrl + zSend the current process to background. This is useful if you have a program running, and you need the terminal for awhile but don’t want to exit the program completely. Then just send it to background with Ctrl+z, do whatever you want, and type the command fg to get the process back.Ctrl + dLog out from the current terminal. If you use this in a terminal emulator under X, this usually shuts down the terminal emulator after logging you out.Ctrl + Alt + DelReboot the system. You can change this behavior by editing /etc/inittab if you want the system to shut down instead of rebooting.

How does windows find my location automatically?