Doc or Docx? Which Office Format to Use

December 8, 2011 | Admin | Technology Information |
For those using older versions of Microsoft Word, or other non-Microsoft word processing software, the new .docx format can be a real pain. It has caused dissension in some workplaces. How to cope with conflicting Microsoft Office formats. 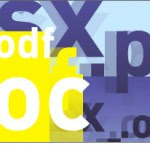